“All it takes is one bad day.” – JOKER self portraits (cinematic reenactment)

In December 2019 I watched JOKER and got deeply hooked. The visual craftiness of the film impressed me a lot – colorful comic-book character style! I took some time out to reinvent my own version of JOKER.

A crossover between cosplay and set-design exercise in my very own home. 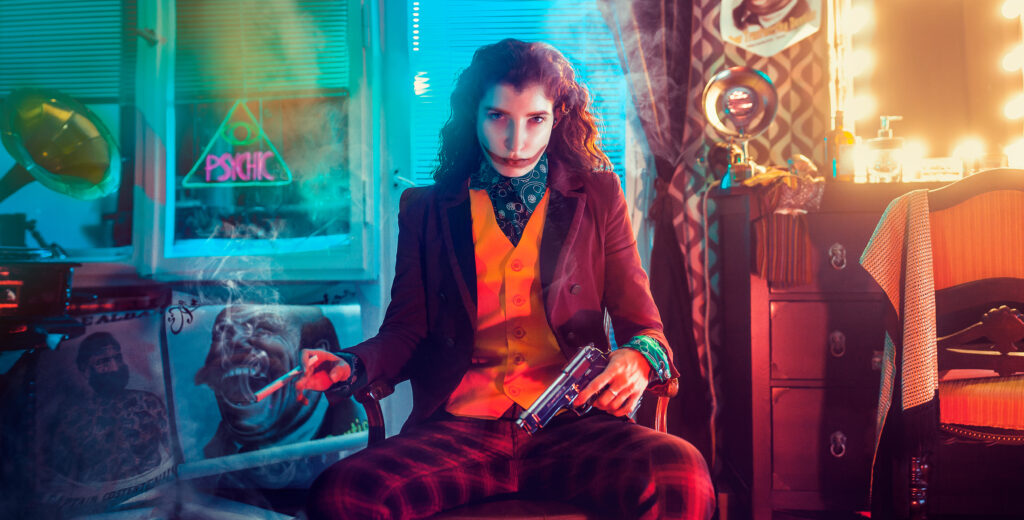 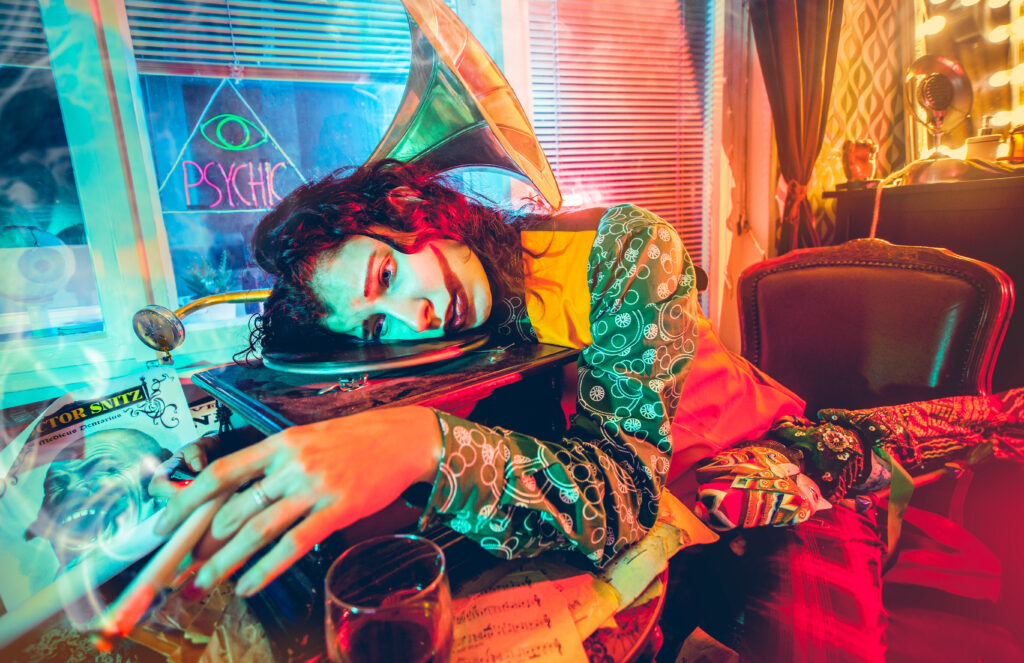 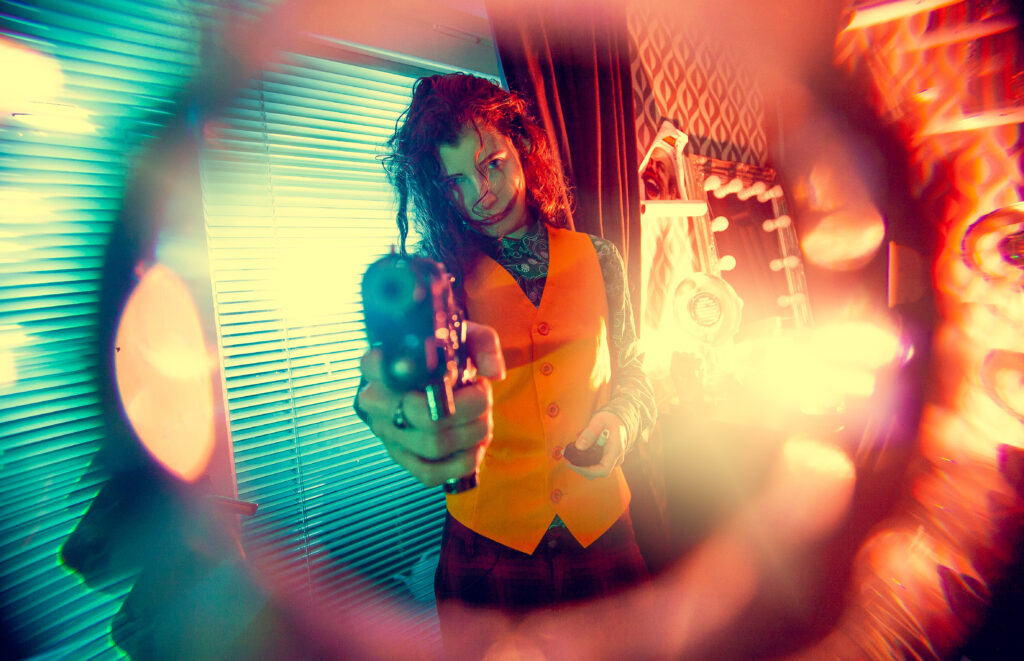 Why is the villain ‘JOKER’ so popular? A comment on why I got hooked, too.
⁠

I’ve contemplated a lot why JOKER’s character feels so familiar, true and freeing for many people… and for me. The movie gave me deep psychological and emotional insights into the characters mental development and instantly I felt highly empathic for this anti-hero. But behold! It’s tempting to idolize this man’s madness and wrongdoings just because ‘understanding’ him.⁠ 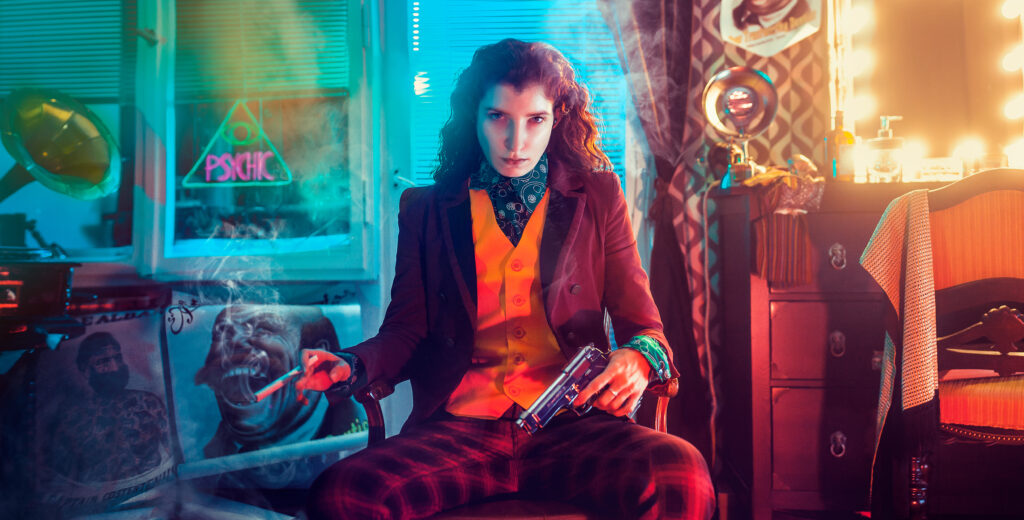 ⁠Reenacting this character gives me freedom from everyday life, from social rules, from political correct humor – and power! Power to create my own rules, ‘pseudo-validated’ meanness for the moment being …and freedom to finally live in my own world (seemingly without consequences as in JOKERs world). 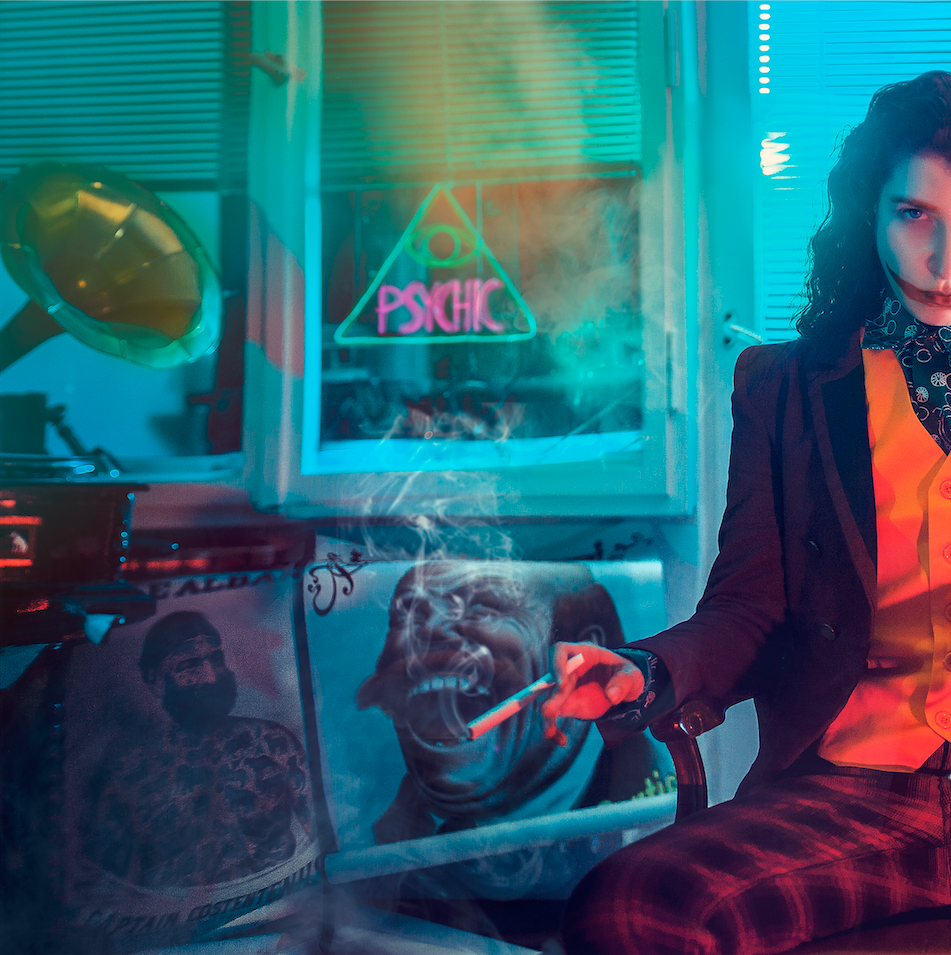 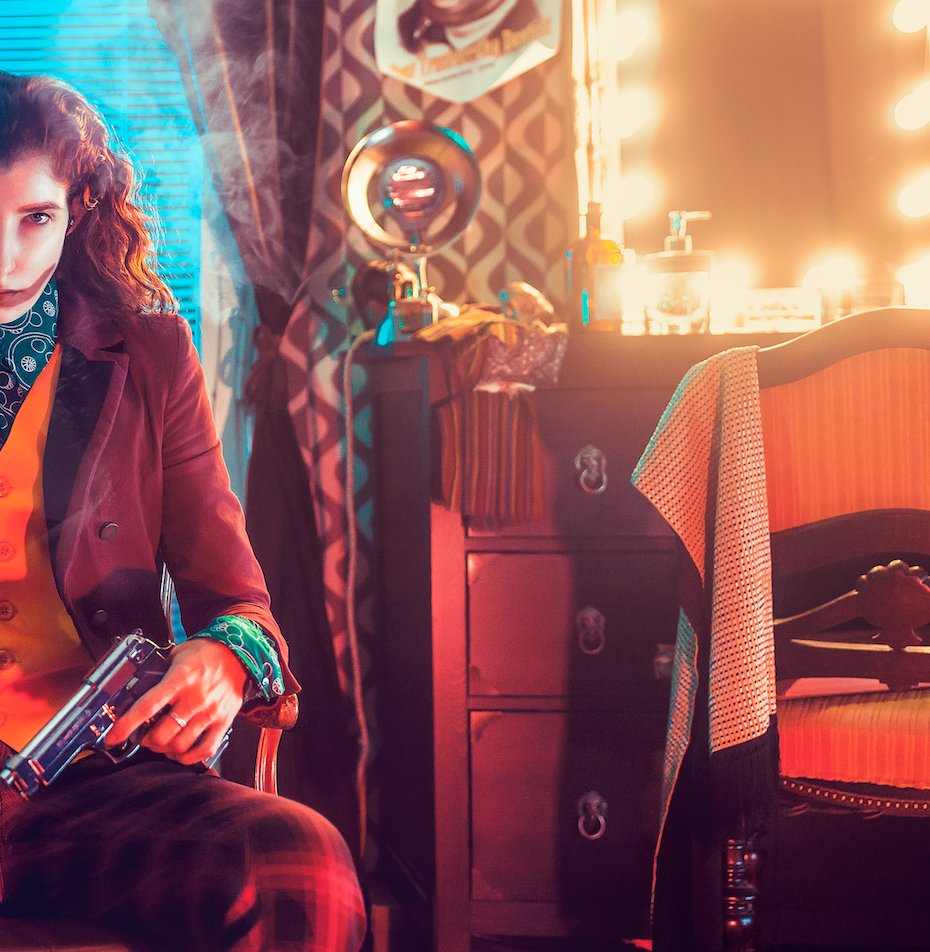 Self portraits can and (in my case) should be a form of cartharsis. In this case I immersed myself into the feeling of ‘I DO NOT CARE’ … not for consequences, not for the feeling of others, not for ANY thing that I do not WANT. Even though I do not want to depict ‘Joker’ as a hero, he is a strong character that embodies pain, illness, confusion and – self immersed power. He is determined, powerful and a great showman. This is incredible attractive to look at.

What fascinates not only me about the JOKER?  He is passionate.

⁠
The Joker has a blank face for everybody to etch their own meaning on and add wrinkles on their own. The famous actors did it (Nicholson, Leto, Ledger, Phoenix), but the viewer does it, too. The Joker wasn’t given an exact back story in the comics and Joker tells many contradicting facts about himself, too. 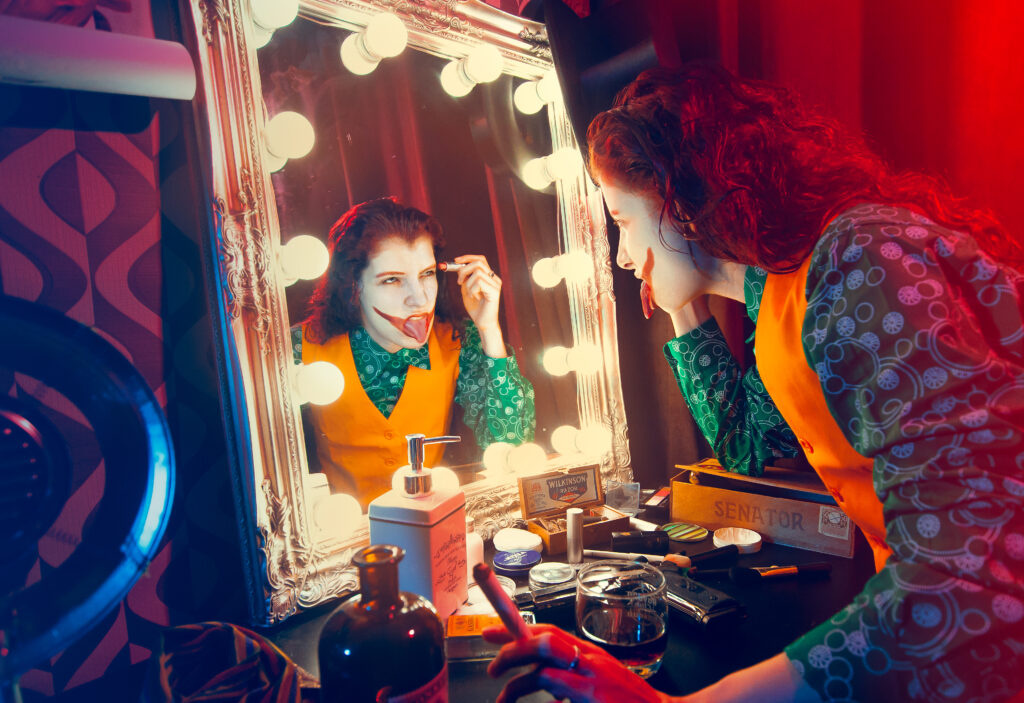 ⁠
The joker is power (he knows exactly which strings to pull to threaten a whole city) and – the joker is passion! He is passionate about his ‘work’. Whatever he plans to do next, he fully commits to it. Jokes aside – he’s in for the game. We admire determined people with a mission and it is exciting to witness. When we read or watch films about him, he seems more than confident and eager to carry out his vision – and this makes him seem heroic and iconic.⁠ 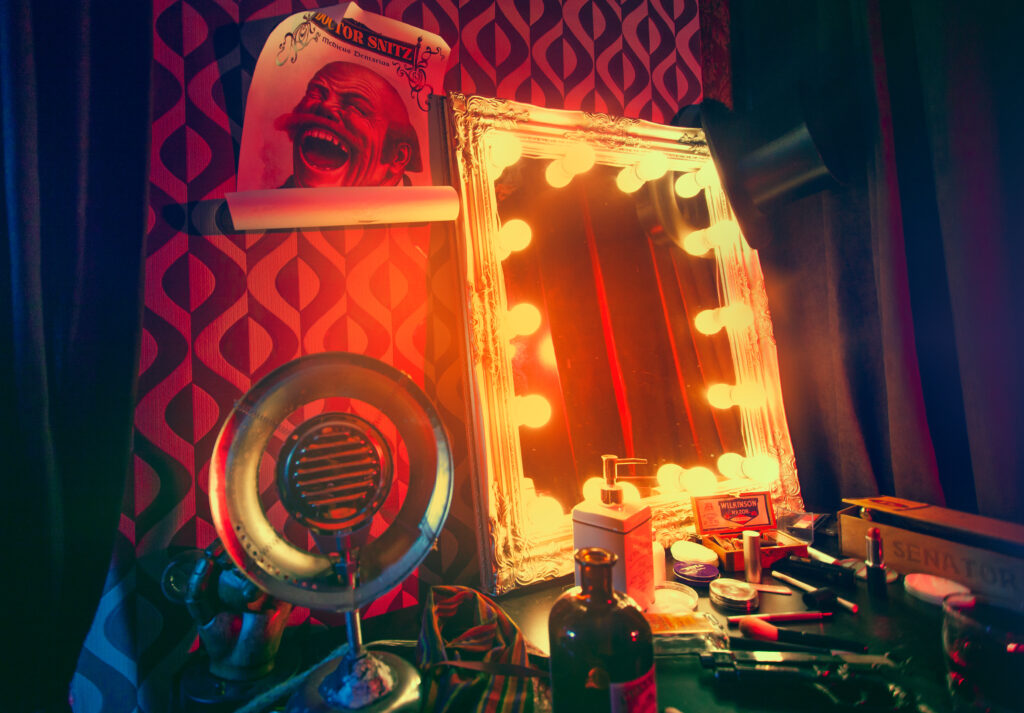 ⁠For me, as an artist and visionary being by job definition, this passionate attitude appeals so much to me – as it does to everyone who has at least ONE dream. We all can relate.⁠

Archetypes appeal. Joker is an archetype: the shadow and the trickster.

⁠
When it comes to archetypes in narratives, there’s usually the ‘good’ and the ‘bad’. These are enduring characters: personified themes and ideas that define central questions of human existence.⁠
The psychiatrist Carl Gustav Jung analyzed many stories. Over the years he came up with many, such as the Mother, the Child, the Shadow and the TRICKSTER.⁠ 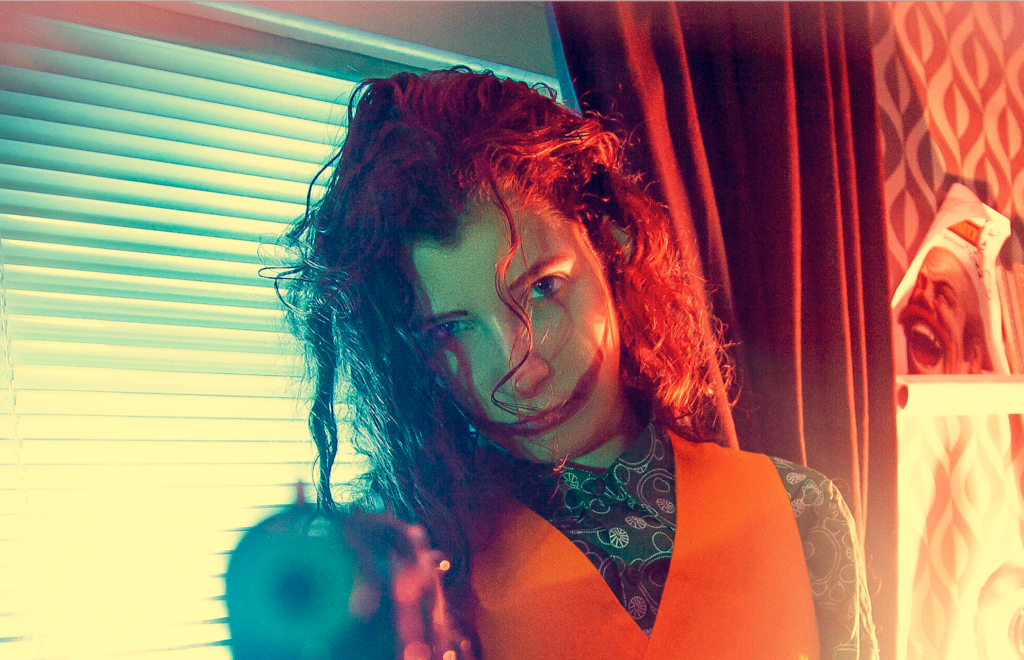 ⁠The Joker is man and symbol: “An agent of chaos” (how he calls himself). To be a trickster is to be both grotesque and refined, smart and stupid, bullish and timid. He’s both murderer and mastermind.⁠ 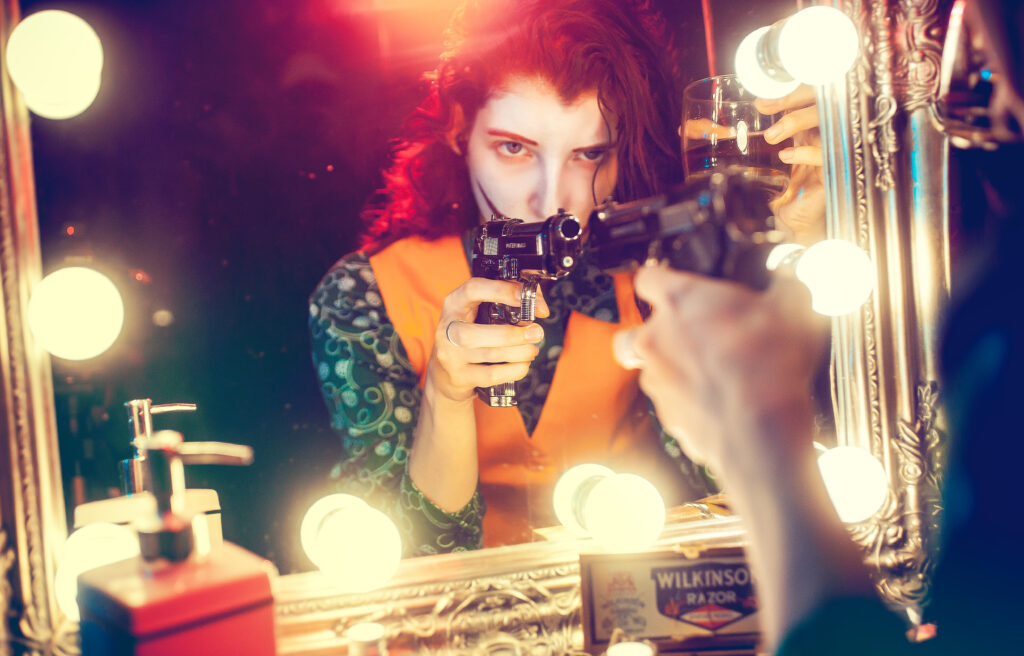 ⁠
In Jungian terms, the Trickster was part of another archetype: the Shadow (but became separated in the earlier phase of human development). The SHADOW is the unconscious aspect of the personality, the dark and unknown depths of mind… and now the Trickster emerged from that darkness, as a persona to roam the earth.⁠ 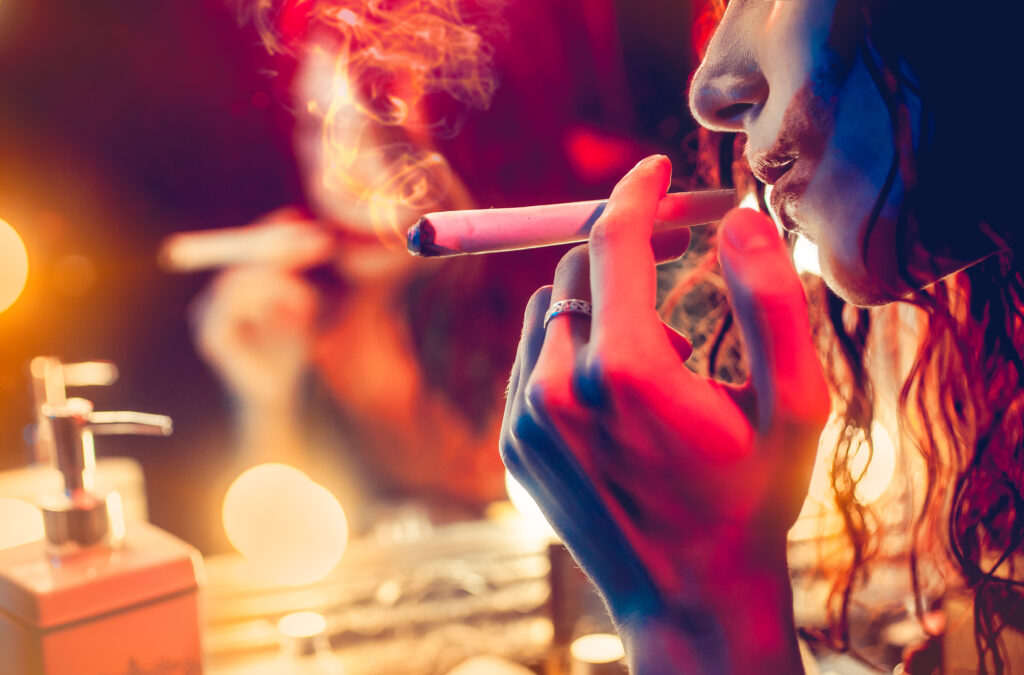 The Joker embodies the unknown darkness of our shadow-parts: the rooms in our brain we won’t dare to go to: killing people, being ruthless and cruel, filled with destruction, violence, anger and delusion.

The joke is on you! Some thoughts about Joker’s humor.

⁠The Joker is described as having an aggressive and dark style of humor: violence and suffering amuse him. He shot someone: he laughs. He pushed someone out of the 45th story window: he’s nearly dying with laughter.⁠
He kills with pranks, often announcing his KILLING JOKES for the sheer fun of making his victims suffer through the worry and for the feeling of power he gets by making fools out of the audience: this shows a clear path towards sarcasm, as well.⁠ 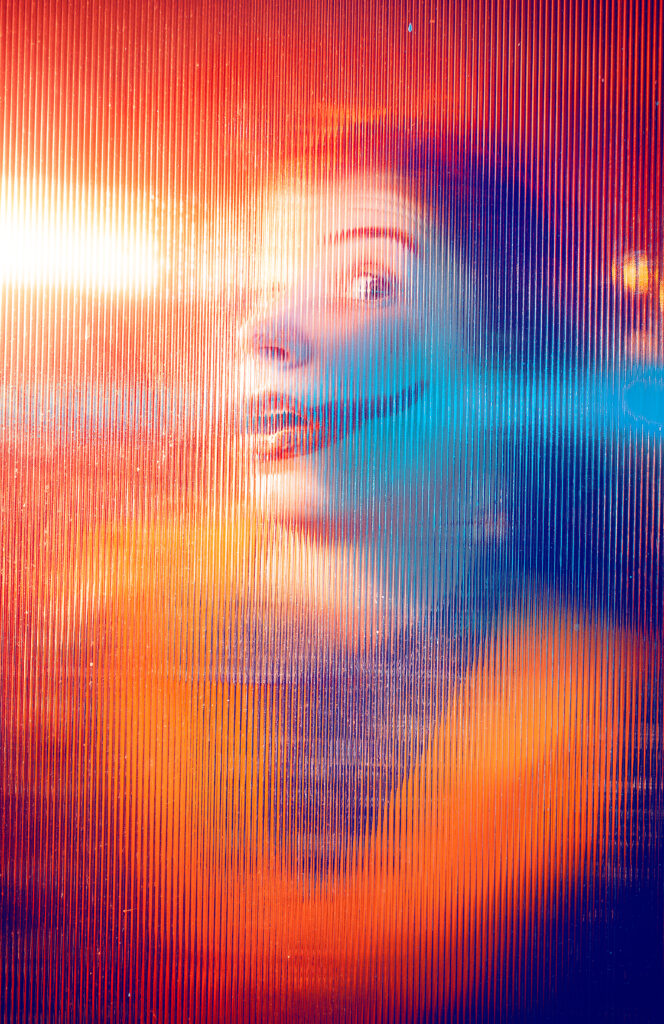 To me, the 2019 JOKER film shows not humor, but the far opposite: how Fleck copes with the darkness and desperation in his life by trying to gain power… and his ‘laughter’ is shown as a clinical tick, a ‘laughing condition’. In 2019, there is no humor (apart from Fleck trying and FAILING to become a comedian), only emotional insight into a dark, lost, sick creature, overrun by society grids.⁠ 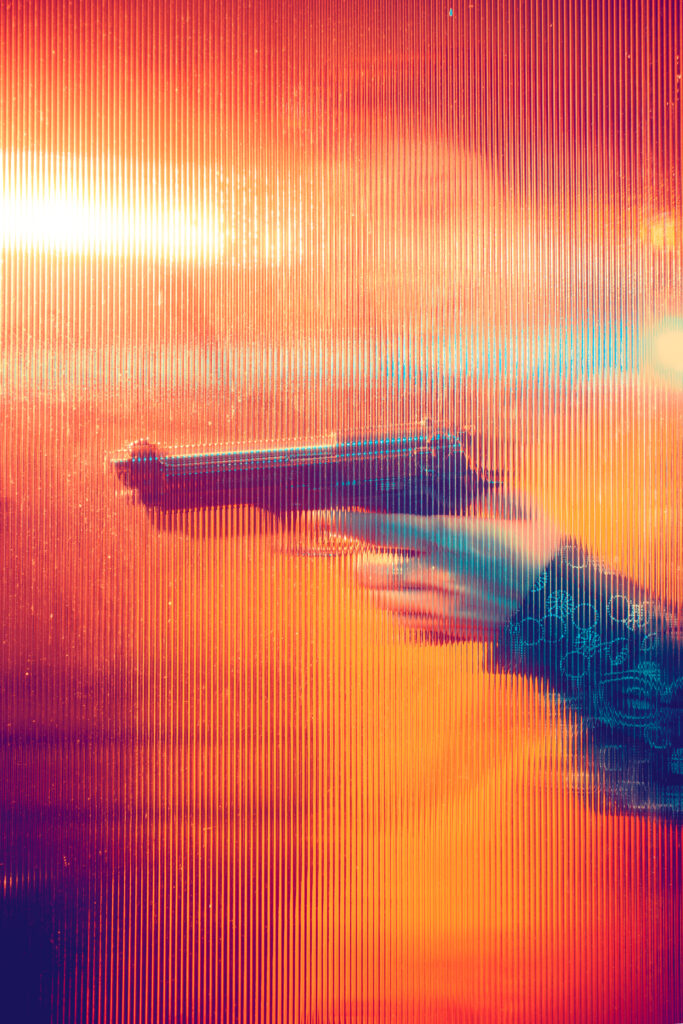 The Joker entertains – a flamboyant criminal and great showman. We love to watch him.

The Joker is a flamboyant criminal.⁠
He is grandiose and a showman from his first line. In the 2019 JOKER movie, this is explored in depth, as the first scene depicts him getting ready for his job as an advertising clown, and even later, the ‘show man’ theme is explored often, as he dances (and therefore entertains) or simple getting ready for the TV show or in his home, putting on makeup. 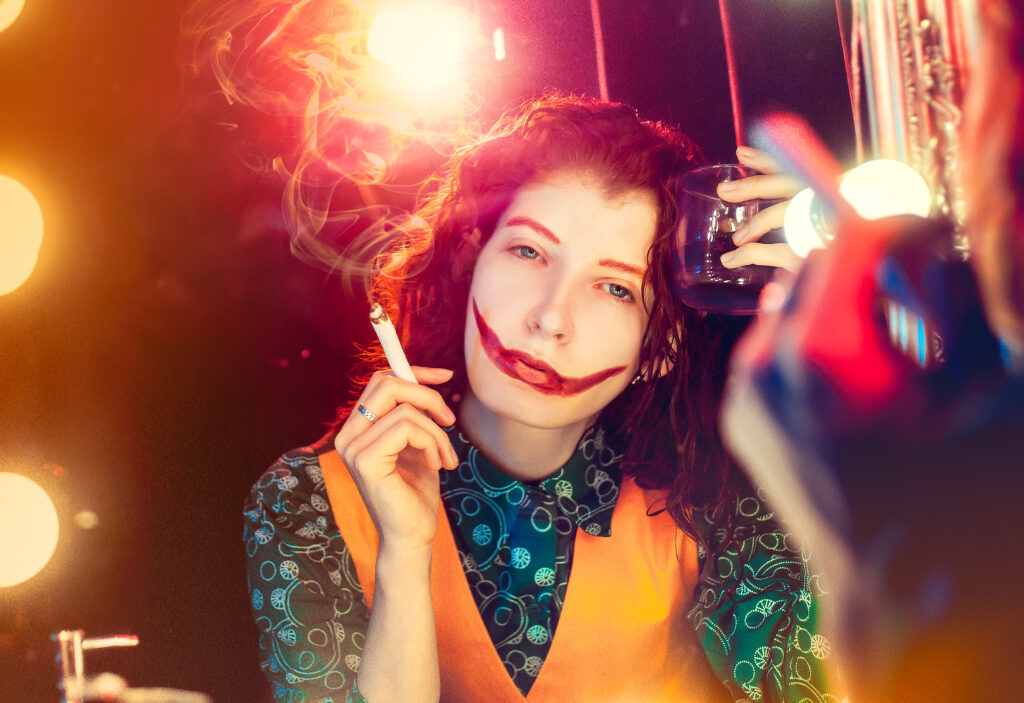 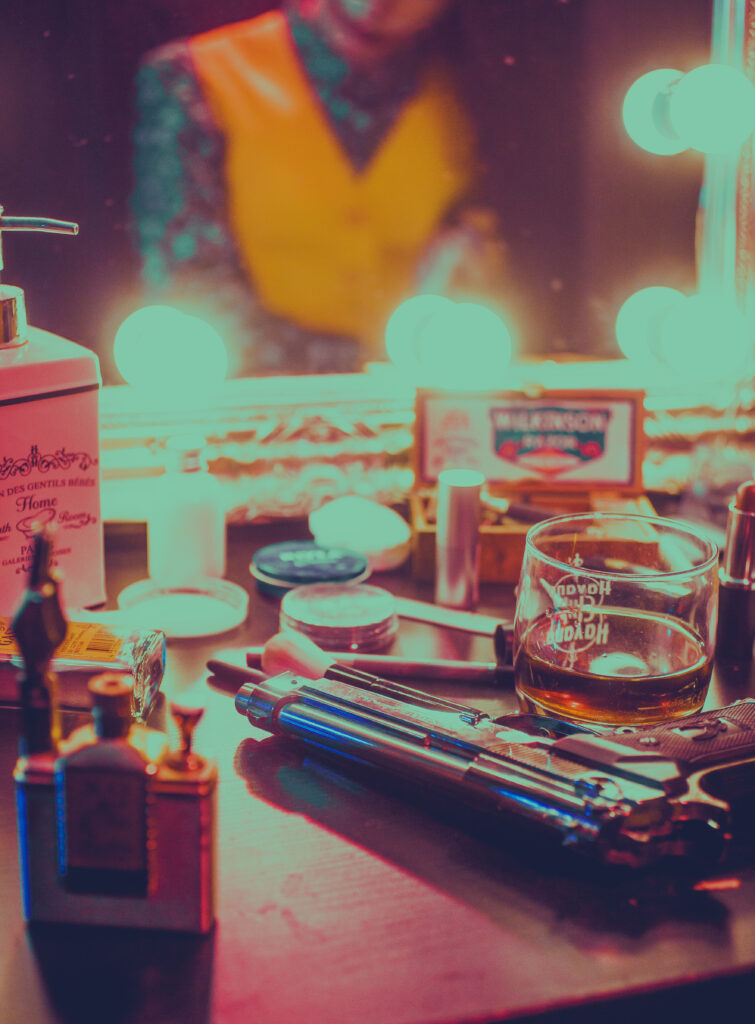 He wants to expose himself to an audience and he wants to be heard, may it be the news, the police, other criminals or BATMAN himself… he needs opponents and overall: an audience.⁠ 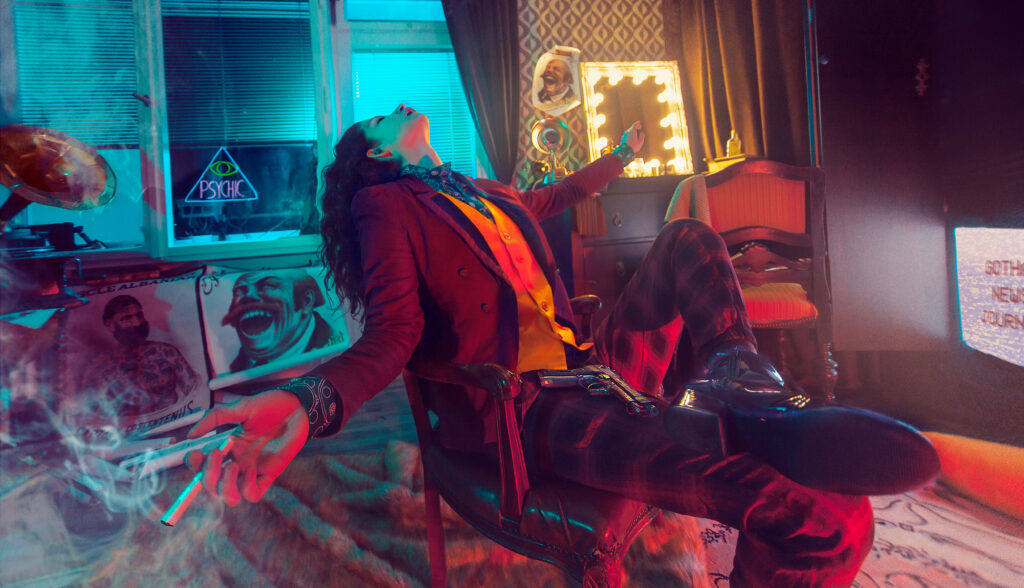 ⁠The culture of entertaining crime is long: think for example of Bonnie and Clyde, two real-life criminals, who got famous by all their witted deeds… and the audiences loved them. They were eager to know more about them and follow their journey, everytime they popped up in the media. For me, this means: we do not only love great showmen who entertain us, but also crime we can watch from our save spot… and both combined in one character is truly explosive material.⁠ ⁠ 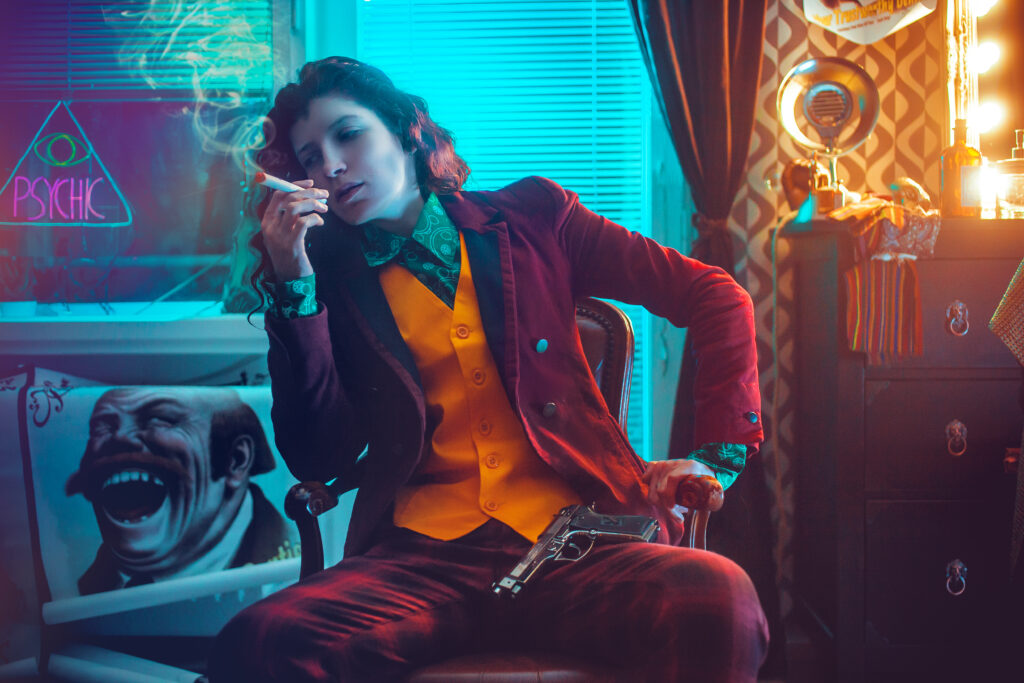 ⁠In the 2019 movie adaption, Joaquin Phoenix depicts Joker as a passionate dancer. When he dances, Artur Fleck is ‘himself’: he is  far away from the world’s harm and in total control of his own power. 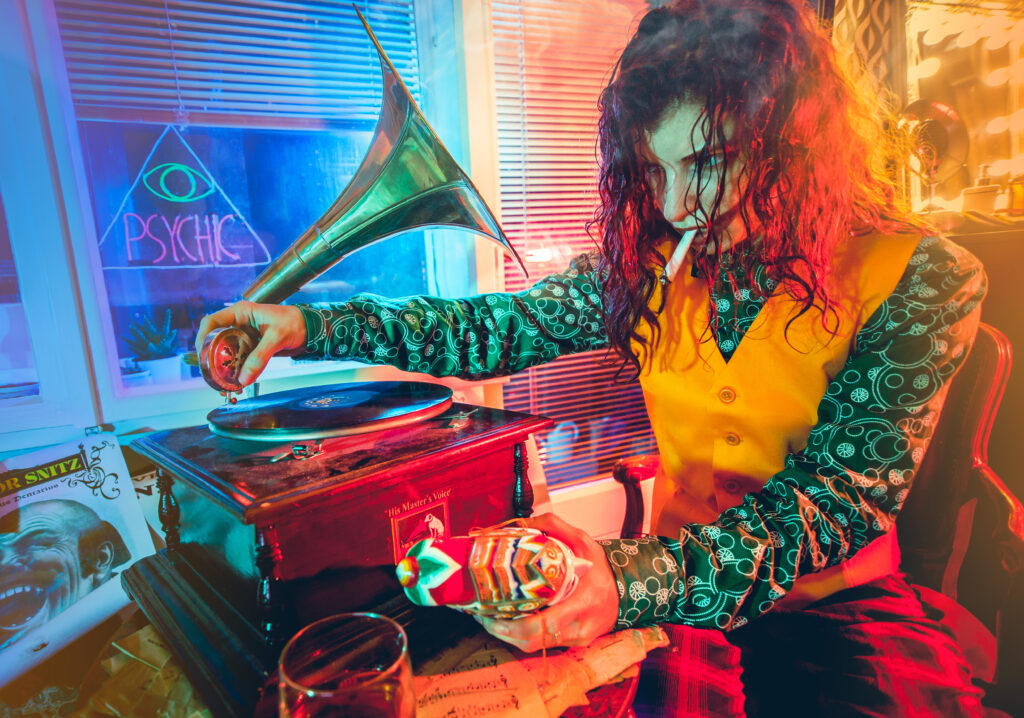 When it comes to the ‘music inside of him’, displayed by the dancing Phoenix so powerfully, he shows his passion inside out: the moments he listens to his music (imaginative or real) and immerses in proud, powerful dances. We can see and feel his mental force.⁠
⁠
This is, what we strive to be: visionary beings that chase their visions through thunder and storm. Sometimes it might take a few delusive moments…⁠ and music to get in the game. 🎵⁠ 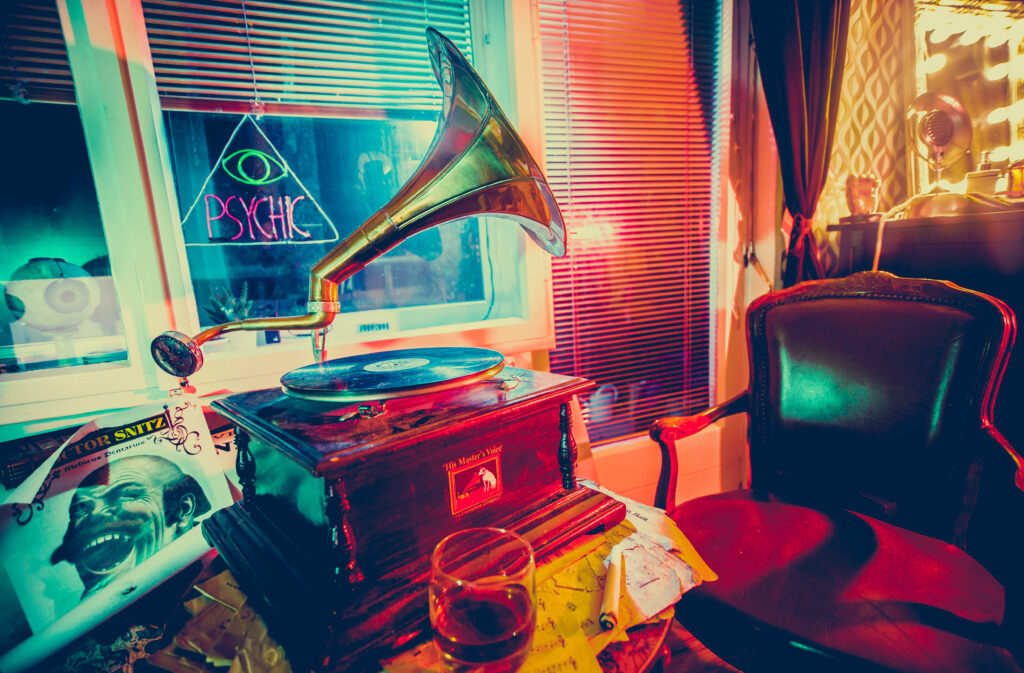 ⁠
These images were really fun to create. Done at home with the help of a self-made ‘psychic’ sign, blue, red and yellow flash lights and that ‘one bad day’ that it took to bring madness to life.