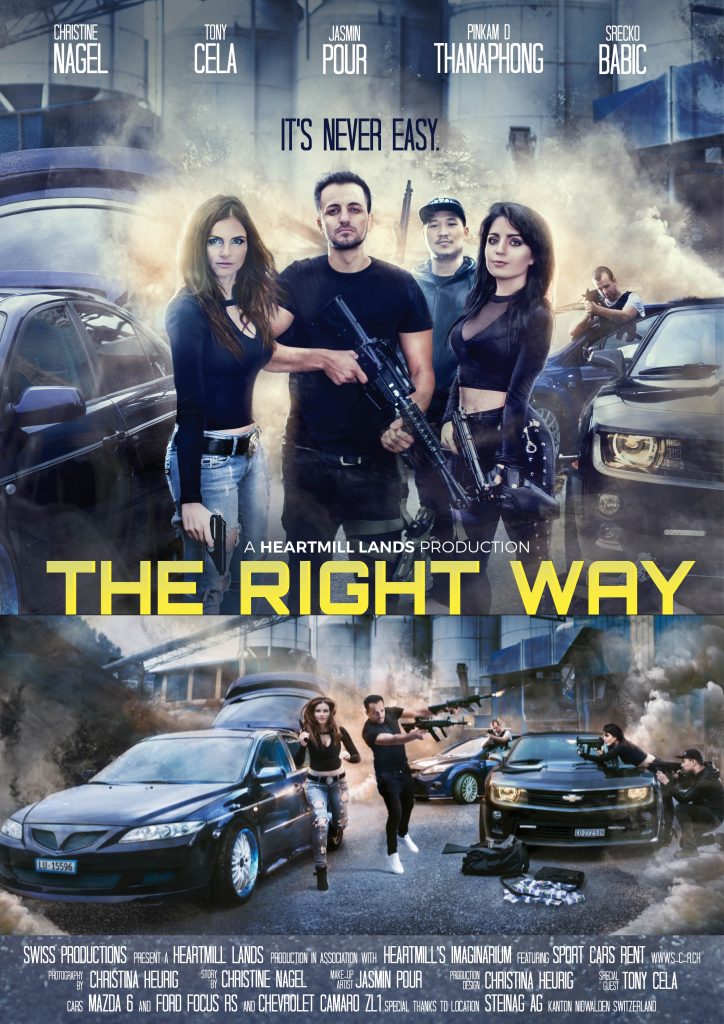 You’ll find more portraits (and making of material) in the full article.

Life is a battlefield and the tides are rough.

Christine approached me with her idea in early summer and I was instantly hooked! She wanted me to create a movie poster with ‘action portraits’ that reuse the classical visuality of action movies: Crisp light, smoke, shiny cars and a fully blown gun-fight.

These images support Christine’s (fictional) movie ‘The right way’. Synopsis: a weapon smuggling couple ends up in a bone-rattling fight as their mission doesn’t go as planned. 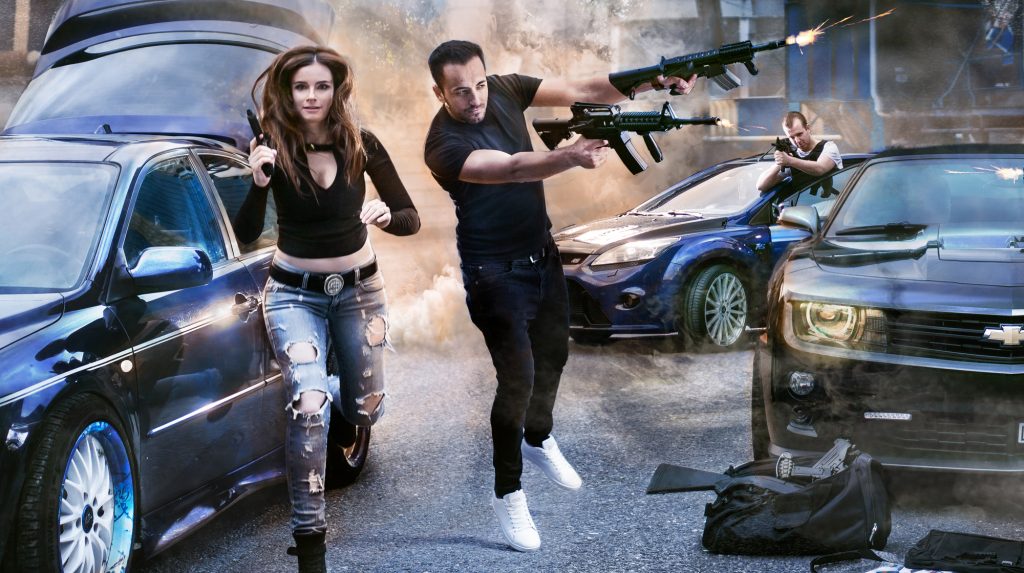 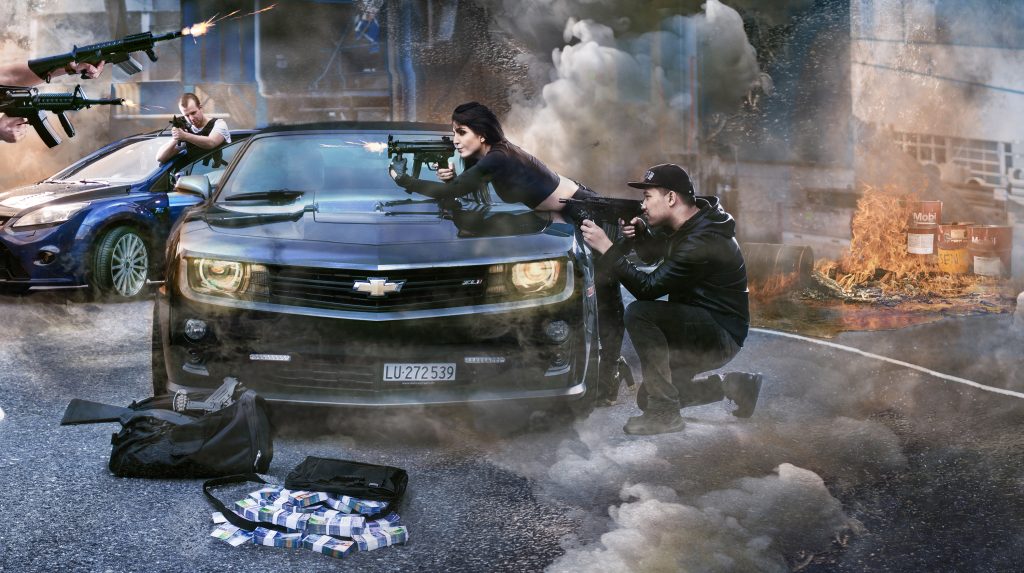 It’s my job to re-create dream worlds in pictures.

It is always a heart-melting experience to see dreams of others come to life. To be a part of that process is the main reason I work constantly with clients.

Christine told me it was a long-term dream of her to see herself as an action heroine on a hollywood-like movie poster. Christine is a very strong, smart and passionate woman and it felt like the role will suit her personality very well.

She and her partner Tony have been through some rough patches on their way. Both are strong, determined warriors who will never stop fighting for their goals – and a happy ending. An iconic movie poster illustrates that perfectly. 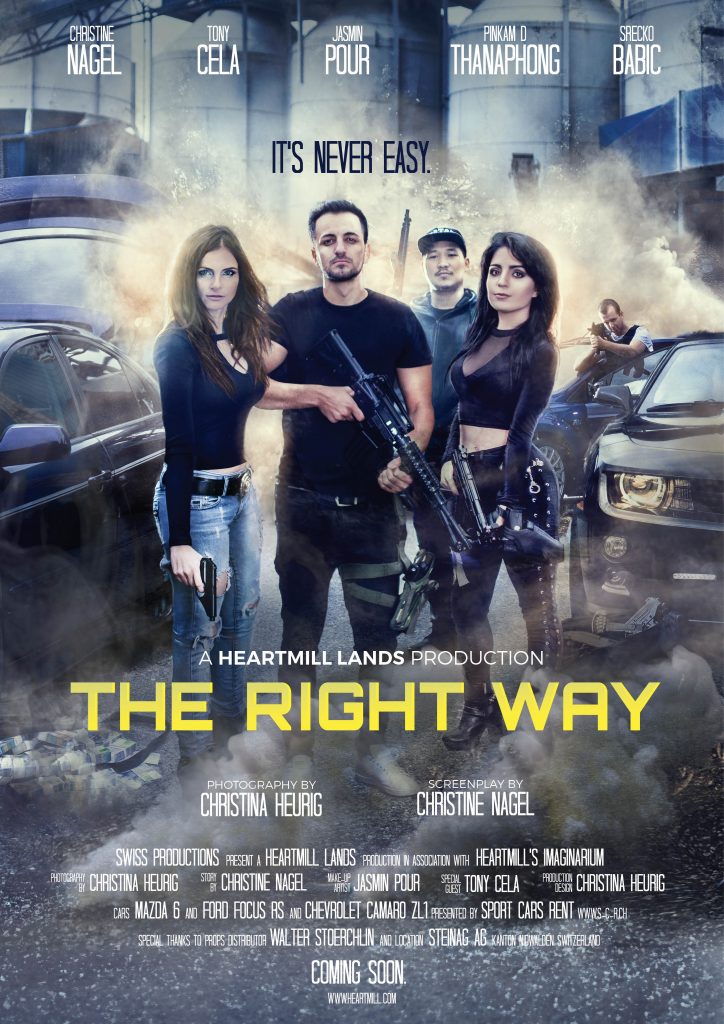 The composition adapts cinematic language from the action thriller genre

The classic action movie dates back to the 70s and often features resourceful heros struggling against incredible odds or villains, including violence and frantic chases.
Christine wanted to bring her car as well into the picture, so we aimed for a classy escape car scene.

We all know it too well: the main lead walking away from explosions, crisp gun shots and shiny car races. It can be cliche, it has to be cliche. Of course, the images display the absolute stereotype of action movies, nearly over-loaded with the complete action-symbol tool kit.

But don’t we enjoy a little over-the-top entertainment? Isn’t it fun to drown in a rich, loud and ‘loaded’ action scene for delight? (That’s why we go to the movie theatre and enjoy all kinds of super-heroic stories.) So hell yes: I think it is! 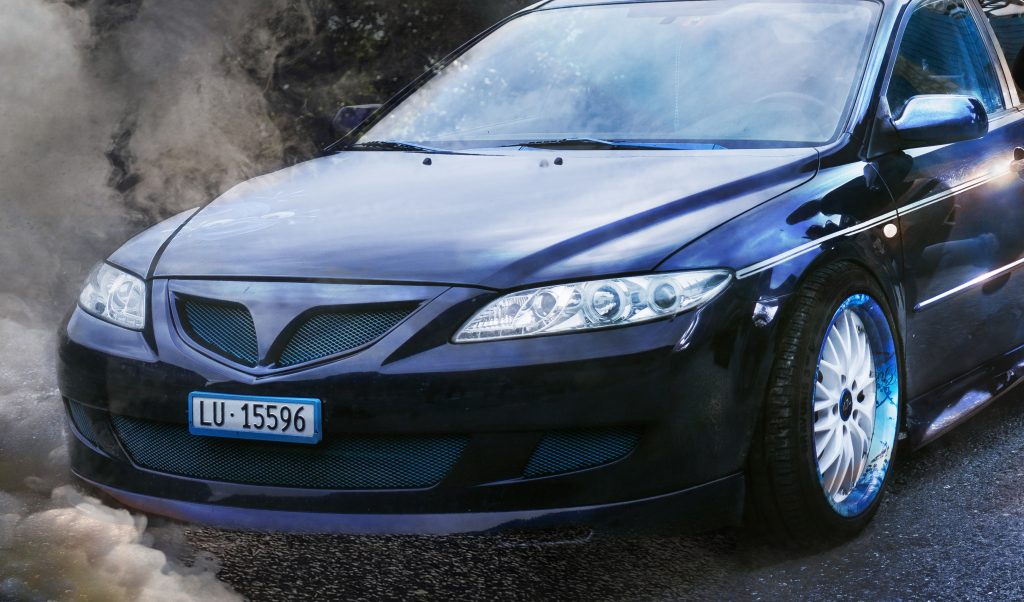 I guess: at times we all think secretly ‘cinematic’: we adapt movie cliches and stories or think of fictional movie heroes like they were real people. Sometimes, movies feel like they are a better world than ours.

I guess: sometimes it feels good to be a fictional character. A person that ‘doesn’t have’ the usual every-day limits like work or the need to do grocery shopping. In movies we get to be icons, adventurers, explorers, warriors, heroes that expose their best attributes to the audience.

I believe that we all are movie heroes in some way, also in real life. Filled with strength, passion and dreams – and all I do is grab my camera and show that to the world. 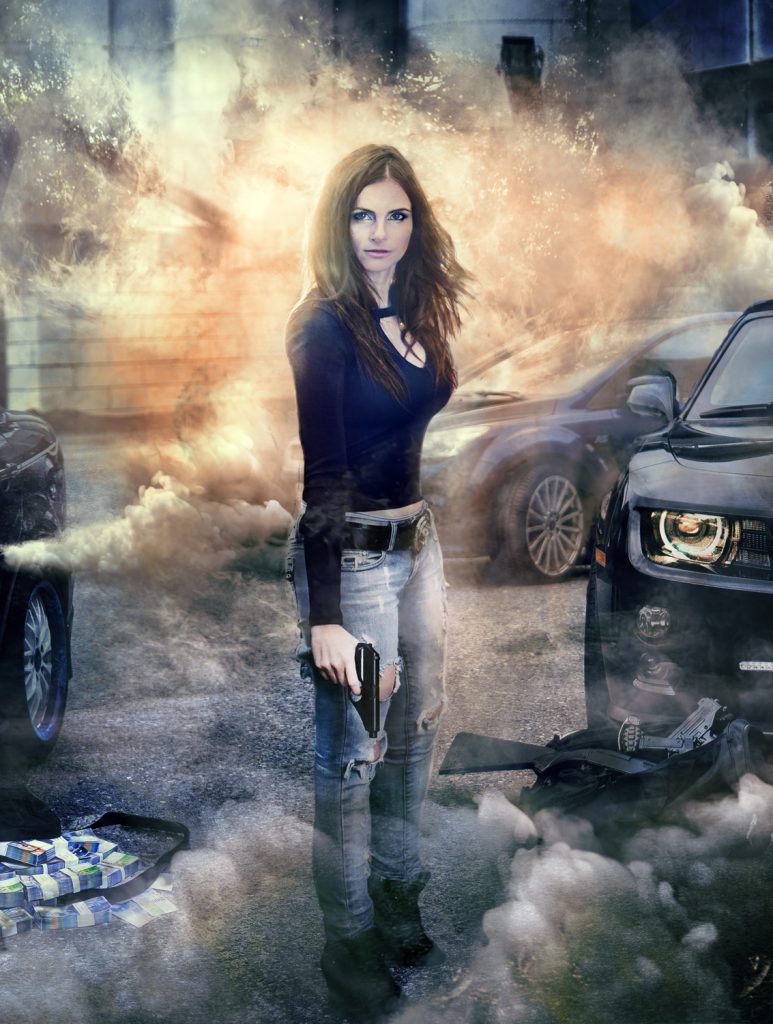 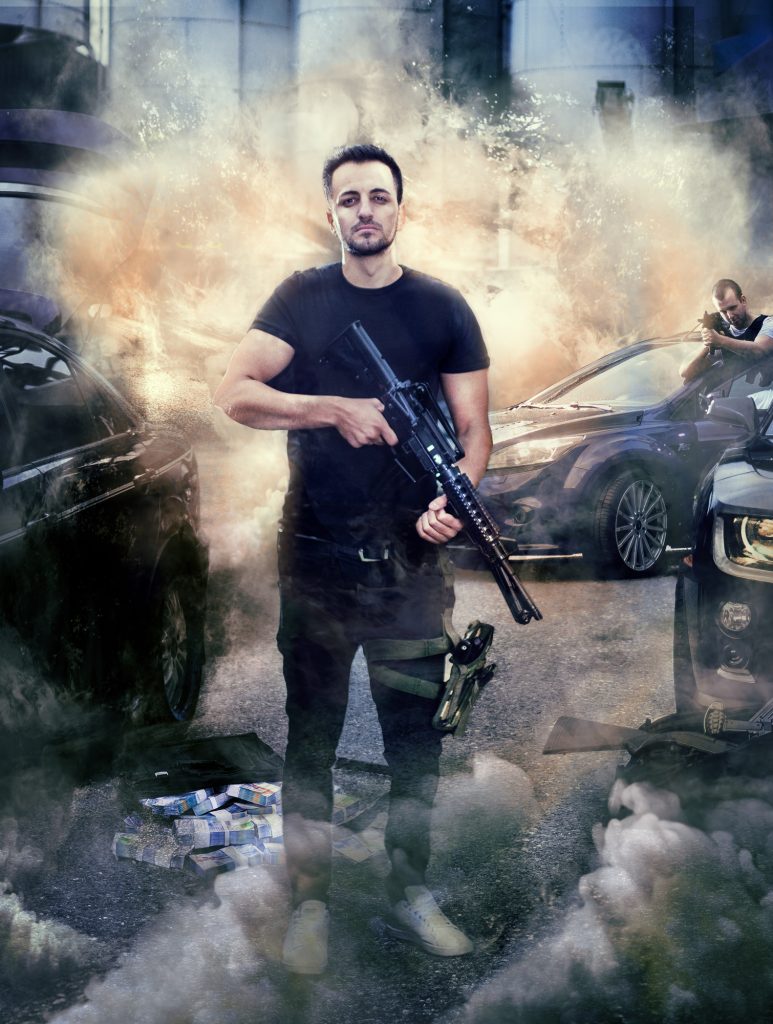 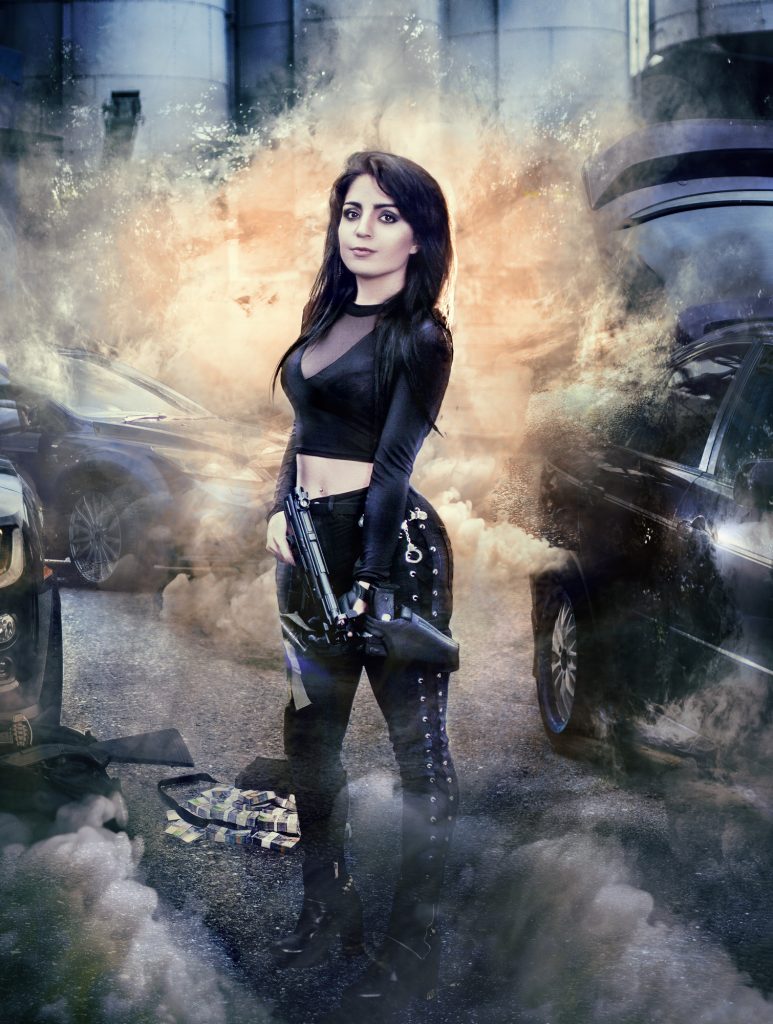 Behind the scenes: How to create an action drama on location.

With Christine’s research we found a great location, an industrial production site that is constantly open on weekends and gave us enough space and privacy to shoot there. We got a permit for the weekend. 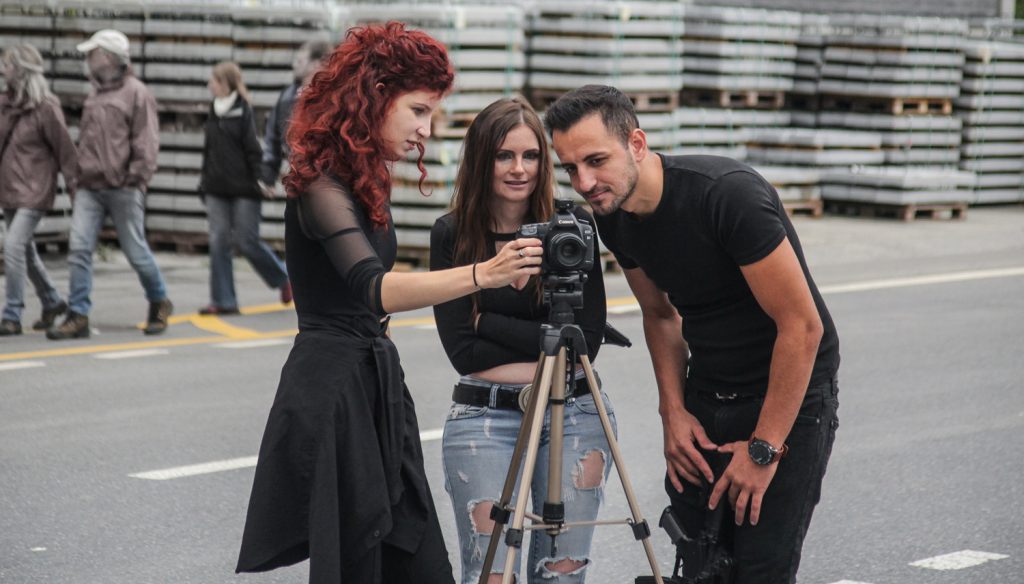 I set up only a few flashes to create the necessary rim lights and sharp edges on their silhouettes.
Also, we were not allowed to use smoke machines (dang!), so I had to work a whole lot of photoshop magic later.

We placed the cars strategically for the large cinematic panorama composition (it always takes a while to set the scene up right). I was so lucky to work with really great clients: The whole group was super focussed and stayed alert through the whole process.

After the set-up I decided to shoot all five characters separately. Mainly, because it is easier to focus on directing one person rather than giving five non-professional models directions at the same time. It gives, both the photographer and the model, the possibility to focus and connect with each other better.

This way I made sure the best poses were taken for the final shot. It will be easy to add each single character later in photoshop.

We organized a bunch of fairly authentically looking guns (if you do not photograph them up close), which made it a whole lot easier.
Especially delighted me Christine’s DIY hack to create a huge stack of fake paper money, which we laid out on the floor – and ta-ta, looks like real money! 🙂 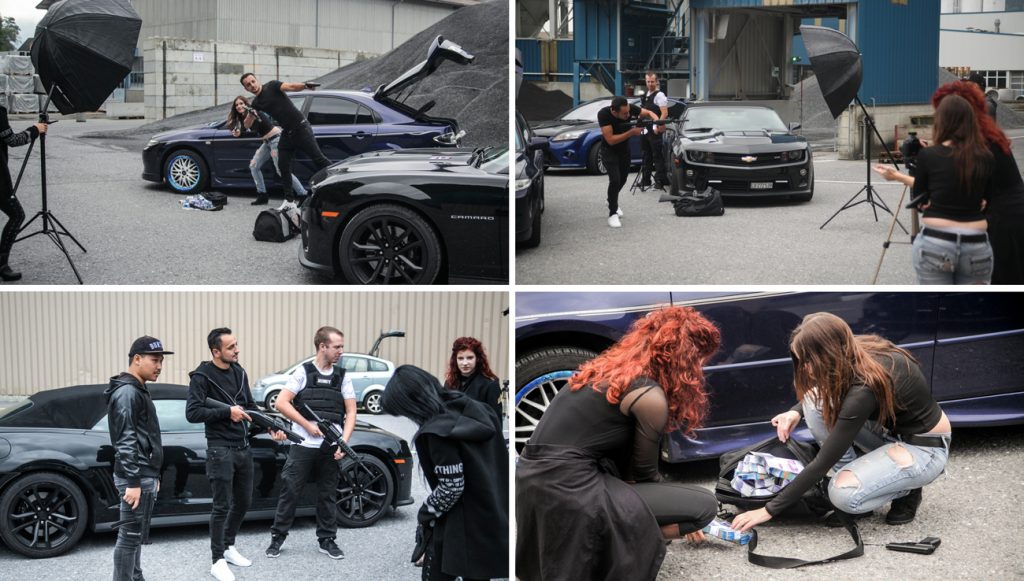 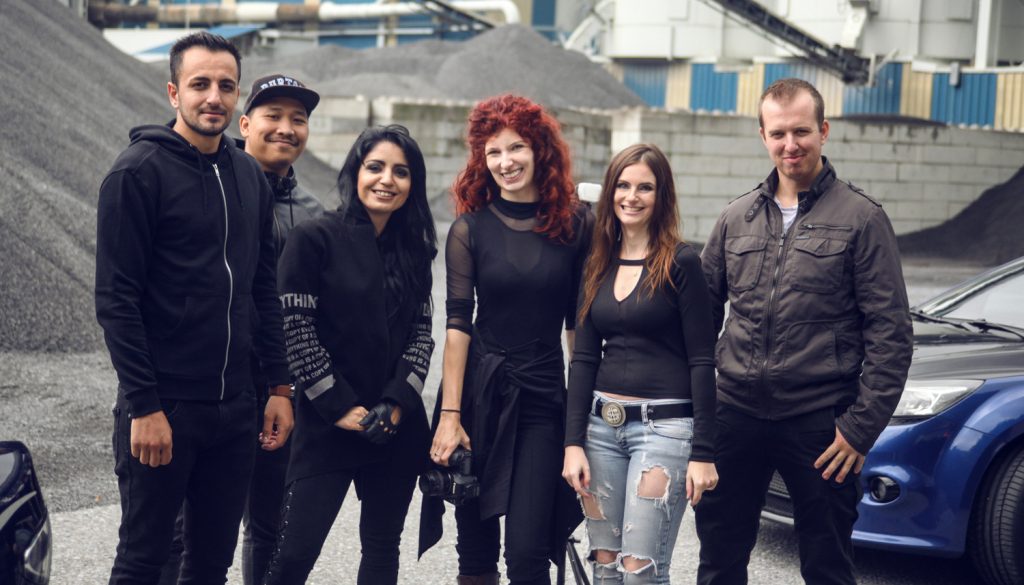 We for sure had a lot of fun and it was a wonderful experience to work with really great, sweet and like-minded people. Thank you, guys!

If you want to know how I did it, you can read it here.