Some shoots don’t end up ‘right’ on location. You have to make the magic happen in Photoshop. I got it ‘right’ 4 years later. 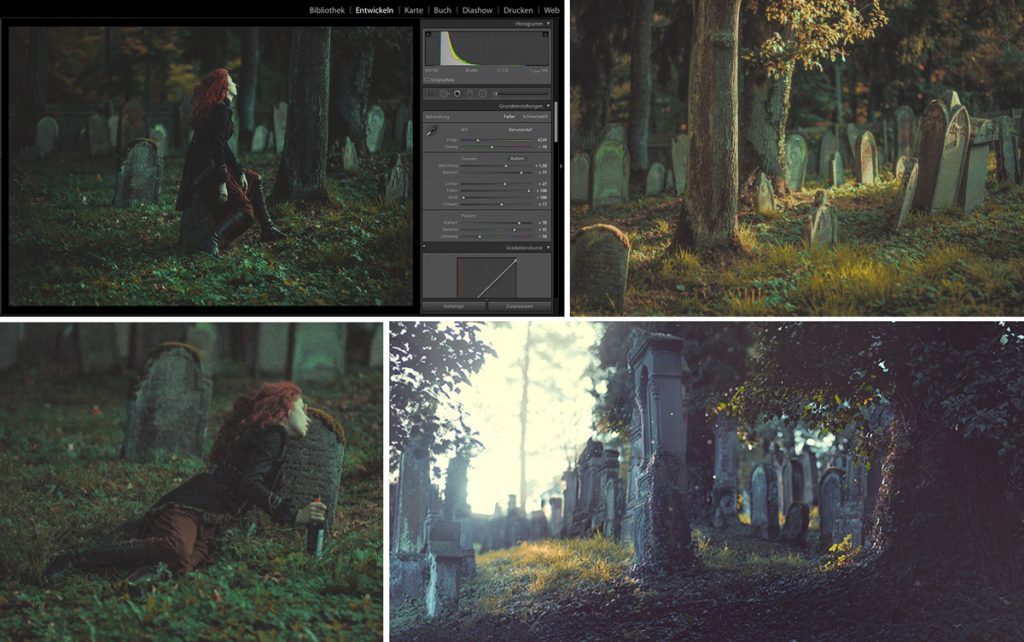 Here’s how I created an epic ‘fairytale’ panorama:

I needed to recycle test shots that were way better than the planned shots.

I shot the images on a hidden graveyard (Jüdischer Friedhof Walsdorf, with permission from the town administration) at summer’s end in 2014.

Initially I aimed for a dark & dawnish vampire look, so sunlight was not of any interest to me, then. (The old result can be found here)

But after the shoot I realized…the sunlight in my test shots did a far more magical job – that I decided 4 years later, to compose a painting-look alike image with it. 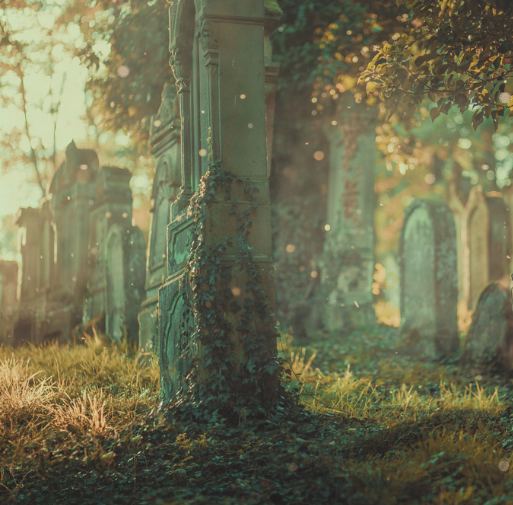 Isn’t this just beautiful? This was actually a real situation, all with the tiny pollen falling down! Whole shot:

Actually, for these shot I used the Brenizer method, which I use often for panoramic images. It allows you to have fewer depth of field and still a cinematic, wide angle look to the image. (That means: You shot all parts of the scene separately, but with a tele lens instead of wide angle. And combine it in photoshop later.)

So I took my Zuiko 50mm (which does a lovely bokeh!) and took this shot (and more) to see what my final shot position will be. 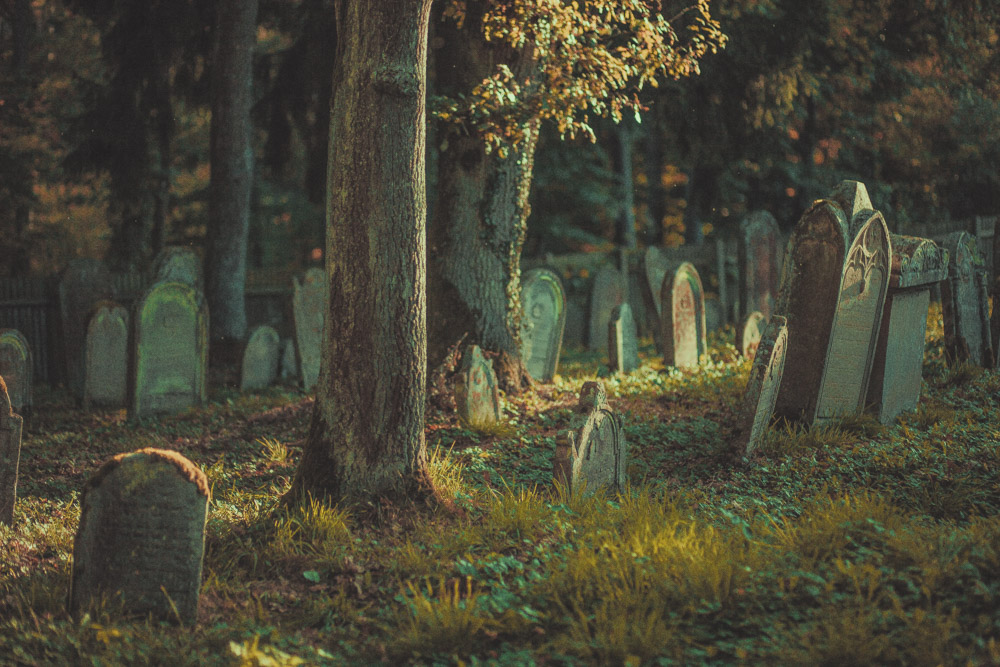 I wanted to give this scenery a real story. That cannot be done without living beings.

Without those, it will be just a plain documentary landscape shot. Which I do not do. I need creatures, or SOMETHING to give the human brain something to connect to.

Luckily, before the test shots, I fiddled around with self portraits long enough to have some usable shots. The light was for a few images just so amazingly stunning, hitting the grass and leaves. 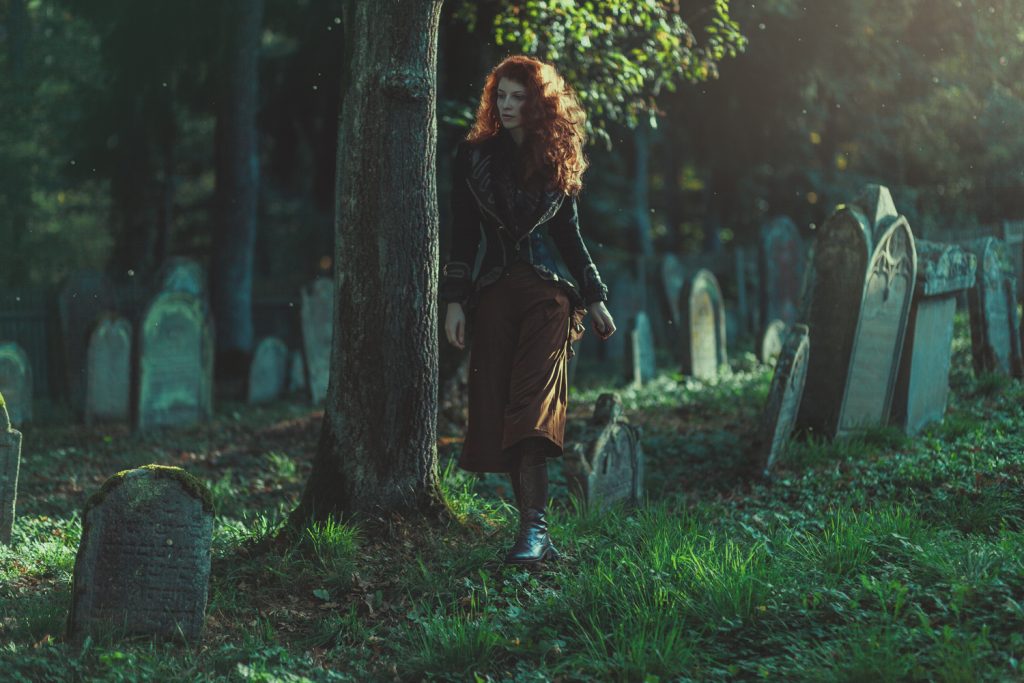 It is tricky to combine different shots and light situations.

I was in awe with this portrait here (which seems to be a witch, a warrior, someone else who is just NOT me – at all! It fascinated me):

But I was unable to combine this bluish-dark portrait (where I already sit without sunlight) with my favorite sun-scene (seen above). Because they had very different light situations.

After I opened the file folder for the 48394238 time to think about a solution, it hit me!  I will put two of the darker, bluish portraits into the shadows, (two red head sisters!), mirror my favorite sun-light scene and add some pieces from the sun-light spots from other shots I took.

I combined two portrait shots: cut the lying girl out and added it to the sitting portrait. Shot in the same perspective, so it is an easy task.

Also copied some grass, because the composition will miss a lot of material at the bottom of the image.

This one was already close to the position where the portraits were shot. Sadly the automatic stitching from photoshop didn’t work well, so I did it manually. With a lot of green and small textures like grass and leaves it is easy to paint it in (and you can be sloppy. No one will know!). No one will notice the little errors.

And YES I am a perfectionist, but after a million of panoramic shots and manual stitching sometimes I learn more and more to be effective. It’s not an advertising for HUGO BOSS… and in my internships I learned how to retouch 100% correct and with perfection. But I begin to love being just efficient.

Exported my favorite shot from Lightroom with the same settings as the other images (luckily I shot in manual and did not fiddle around with different exposures between the shots. Makes it a LOT easier if everything is the same.)

Also blended it in manually because Photoshop does not recognize which grave stone I want in the picture and which not.

Added some grass from another shot, because the image above had no material left to cover the edges. It was sharper than the area next to it, so I applied some motion blur to the grass. Now it fits the foreground plus does not attract the eye. The human eye sticks always where it is sharp.

Added some fairy dust dots, painted in a bit of white to make it look foggy – and more fairy-tale style. Some last curve corrections (mainly at the top and bottom to guide the eye from the girls to the yellowish right hand side, where the light comes from.

Not too much – because it looks cheesy VERY fast when overdone.

For me, story-telling is crucial to all images. I am not into „fine looking girls and some nice scenery“ pictures. It has to run deeper!

In this case, the composition was connected to my personal story.

Back in 2014, I had a very difficult time with a toxic relationship and my personal life. I gave my attention, my heart and soul to people (too much of it). A favor that wasn’t returned at that time.

I took those graveyard images shortly before I realized the person I loved will never talk to me again. (It was a relationship that lasted years. If you can call it that. A case of ‘ghosting’.)

I’ve learned a lot from that experience. Today, years later, with an amazing life between it, I feel no pain anymore! This was a ground breaking realization, because there was so much of it for a long time. So it finally was time to celebrate this circumstance with a beautiful, romantic fairy tale image! For me, it became a pretty memoria for the waiting, hope and despair walking hand in hand.

Sometimes it is okay if images sit around for years before you work them into something.