The Heartmill Lands: Making of Pt. 1

In 2014 I started creating miniature landscapes with photography and everyday-objects.

This beautiful landscape is made of everyday objects: 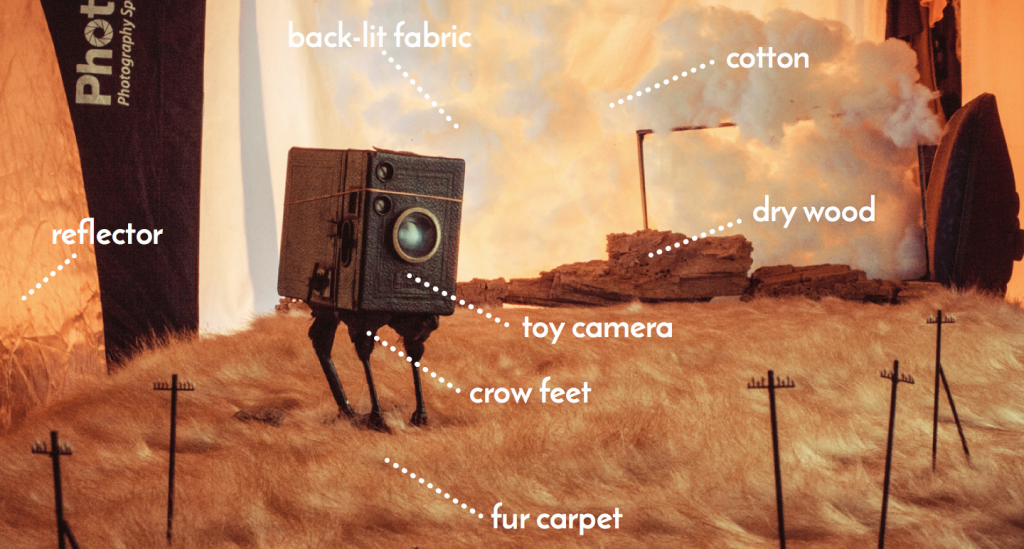 This was the creation process that triggered my career in set design.

How? Read more in full article.

Why I started it: the need to create my fully controlled *fantasy* home.

I shot people for years and years. (With the camera. And with darts, duh!) But it never seemed to quite fit to the wicked, mysterious, quite surreal world in my heart… those worlds I wandered in my dreams…

Don‘t get me wrong, people are not boring – but some emotions and thoughts, so it seems – can be depicted best without a human soul in it.

It started in October 2014 when I first picked up some random toys and arranged them into a landscape. The idea on it dwelled for months and years. I don’t know even how it got so attatched to my brain. Maybe while I fed some little fishes in grandpa’s fish bowl when I was 10. Maybe because I sometimes sit in my room and pretend that everything is ten times it’s size like in Wonderland.
Maybe because I want to escape so desperately to the places I feel home in.

Because I want to be a 3 year old child again who arranges toys and pretends to live in a far away country as king and queen.

Be a child! I took my toy plane and started messing around. With cotton.

At some random point I just took my toy plane, pulled the curtains so my room was totally dark, cleaned my table and lay some cotton balls on it. I put the toy on some strings and hung it from the next best tripod I could find. 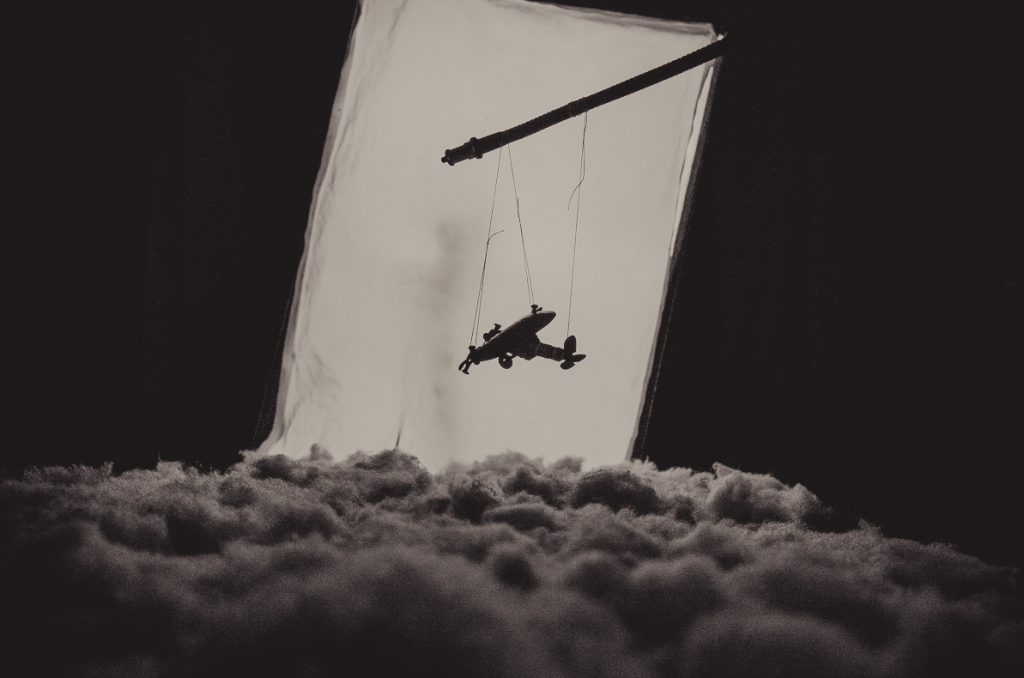 My whole room was basically a big table 2-meter table with cutton clouds on it and a soft box in the rear end. I loved the unsharp “clouds” in the foreground of the image. It felt like floating, just being really above the clouds. Imitating a real nature scenery was thrilling, because it felt so real, but still was “just” in my room, made of toys.
I took some experimental shots afterwards… 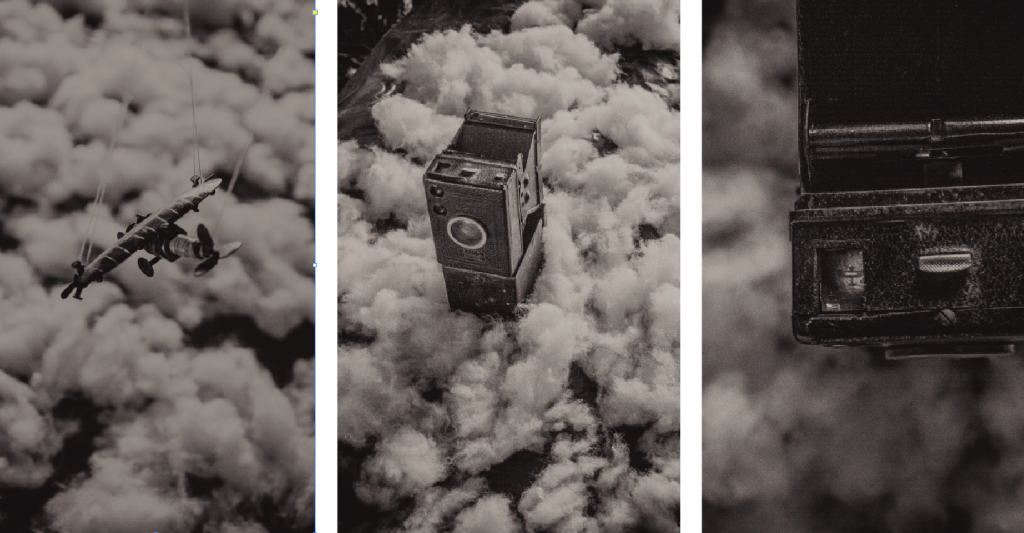 … and soon I realized all the possibilities it held for me. A wonderland. So I went on working:

My toy camera became an exploring cyclops in a desert field – and an iconic image.

This scene popped up in my head the moment I saw my fur coat on the floor while I held the camera. It is my grandpa’s camera (that I never, ever used because analog is not my friend until now. I really tried. I did. Splashing around with liquids in the darkroom is just no fun for me…)

The fury blanket  reminded me of me being little and pretending on grandma’s fluffy carpet that I am in a big field with high gras. Also it made me remember the tale of Baba Yaga (a russian folklore about a witch living in a house on chicken feet), a rather odd story. 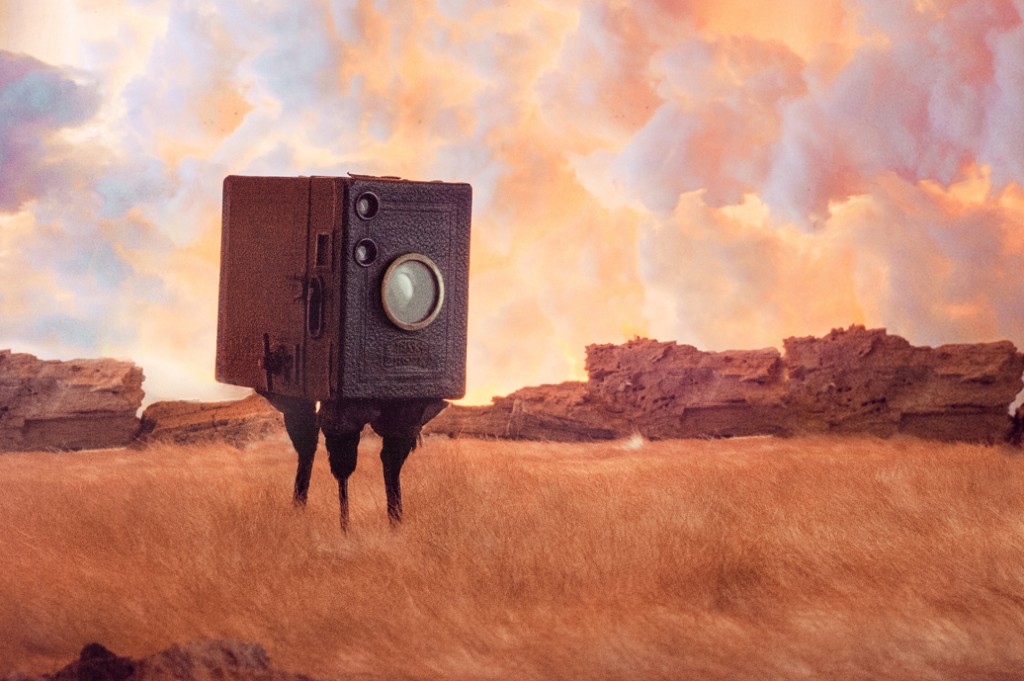 It was instant love, it was instant fascination, it was instantly the symbol of my whole existence: a lone wanderer in the hot desert, a cyclops monster staring at the surreal world around it, exploring, standing, staring.
Awkward, lonely.

In the beginning I experimented with toy utility power poles (that were usually for toy train systems) but it was a struggle with them. Always fell over and my 50mm lens could not catch them sharply in the foreground.
Miniature dioramas are very sensitive to perspective and with the 50mm I got the most real landscape feeling (my 80mm tele compressed the space too much – the illusion fell apart).

It did not take much to create an illusion: some drift wood in the back and some crow feet glued with clay to the bottom of the camera. Ta-ta: looks like field.

I glued some cotton balls to a white cotton sheet and lit it with a flash from behind.

To reflect rather golden light I used the gold side of the reflector, as well as (not in the making of picture above because added this later) a red-ish flash from the side to make the clouds look a bit pinkish.

The only retouching was to get rid of the rubber band (I confess: I AM LAZY: the camera always fell apart, so I got angry and just rubber-banded it. ha.)
and enhance some of the colors. But there is no adding of image parts in post production.

So the kingdom of surreal landscapes came to life.

I called it soon after “The heartmill lands”. Why that is you can see here: http://www.heartmill.com/blog/2016/02/17/heartmill-land-miniature-landscapes-pt-2/

And they lived happily ever after.